Even though the mean age at childbirth has increased in all countries in the recent decades, a non-negligible proportion of women still give birth at a very early age. The graph below shows the percentage of women of three different cohorts who have given birth before the age of 20. The data reveal a sharp East-West European contrast, with much higher percentages of women experiencing early childbearing in the East than in the West. Among women born in 1975-79, around 4 percent gave birth before the age of 20 on average in the Western European countries represented in the graph, against 17 percent in the East, although with very large cross-national differences. The reasons for early childbearing are complex but often involve a combination of poverty, low education and limited access to contraception. Universal access to sexual and reproductive health-care services and a reduction of adolescent birth rate are at the core of the United Nations Sustainable Development Goals. Data from the Generations and Gender Survey help to monitor these demographic trends.

Proportion of women who gave birth to their first child between age 15 and 20. 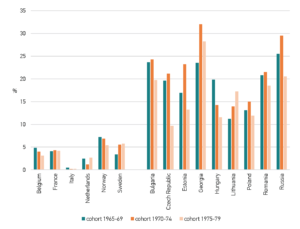